Window Dressing the Muslim Ban, authored by the Center for Constitutional Rights and the Rule of Law Clinic at Yale Law School, documents the impact of the Muslim Ban on Yemeni nationals applying for immigrant visas to the United States, the mass denial of waivers, and the resulting hardships inflicted upon Yemenis and Yemeni-Americans. It is based in part on interviews conducted in Djibouti, where many families have been left stranded as they wait for visas. The findings of this report call into question any neutral, security-based interpretation of the Muslim Ban that has been central to the government's defense of it.

This report does not propose recommendations to the State Department to improve the waiver process, because we believe that the Muslim Ban is fundamentally discriminatory and should be struck down in its entirety. We hope that the report will be a useful resource for Yemeni-American communities as they continue public, media, and legislative advocacy that centers their stories. Such efforts have been essential to legal and policy developments to date, and have given advocates the sole source of insight into an otherwise opaque process. We encourage allies to continue to demand transparency in the U.S. administration's implementation of the policy and to oppose all iterations of the Muslim Ban.

Read the PDF of the full report.

This report is part of CCR's Yemeni American Justice Initiative (YAJI), a project that aims to address the systemic obstacles faced by Yemeni-Americans and their families due to the heightened scrutiny directed at those communities by U.S. government authorities, particularly in the contexts of immigration, naturalization, and law enforcement. 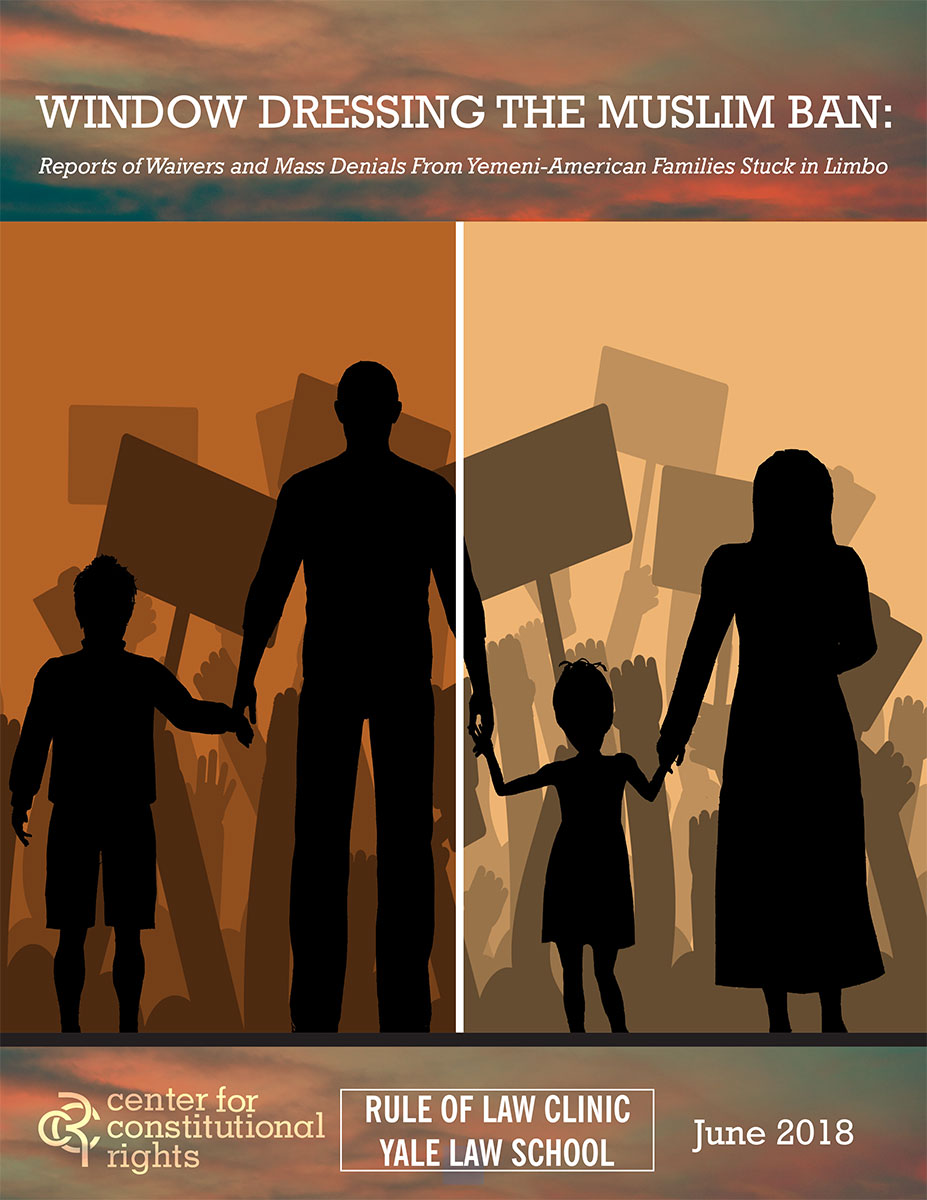 “My view of America changed a lot. There is war in Yemen, why do we have to be affected by this? My cousins, my grandfather were in the US. My whole family is there. We are not trying to do anything illegal. I went through the immigration system. We did everything right. I just want one reason. Every single day I suffer.” – Amin Alzandani

On February 2, 2017, throughout New York City, Yemeni-Americans shuttered their businesses, left their homes, and joined thousands of others protesting the Trump administration’s first Muslim Ban.i For Yemeni-Americans, the Ban was personal. Yemen was one of the seven majority-Muslim countries whose nationals the Ban suspended from entering the United States.ii Overnight, plans to reunite with children, parents and other family members were thrown into disarray.iii Protestors waived American and Yemeni flags and signs: The United Immigrants of America. Don’t Ban Our Families, No to Muslim Ban.

More than a year later, those fears have been realized. U.S. citizens and lawful permanent residents (LPRs) of Yemeni origin remain separated from their families and unable to build the lives they dreamed of creating together in the United States. Following a series of losses before the courts and under intense public pressure, President Trump amended the Muslim Ban in a manner that was less overtly discriminatory and, theoretically, more tailored. One change was the inclusion of standards for case-by-case waivers, which are supposed to be granted by consular officers on a discretionary basis, and to provide a path for persons otherwise subject to the Ban to come to the United States if they meet a number of factors, including if visa denial would cause an “undue hardship.” Yet as this report documents, despite the formal inclusion of a process to obtain a waiver from the third iteration Muslim Ban, soon after the Ban’s implementation reports of pro forma, en-masse denials of visas petitions and waiver denials emerged effecting numerous Yemeni applicants as well as applicants from other banned Muslim nations. Throughout this period, Yemenis received extremely few waiver grants.

In April 2018, the Supreme Court heard oral arguments about the third version of the Muslim Ban, at which the Justices asked about a waiver case involving a Yemeni, and the waiver process more broadly. The government had argued in part that this version of the Muslim Ban was not a categorical, discriminatory ban on Muslims because individuals from banned countries could nevertheless apply for a waiver based on assertedly individualized circumstances. Yet, Justices Sonia Sotomayor and Stephen Breyer both asked whether the waiver process was merely “window dressing” for the Ban.iv In the period surrounding the oral arguments, reports surfaced of a sudden rise in the number of notices of reconsideration of denials issued out of the U.S. embassy in Djibouti. One of these waivers was granted to the individual whose case the Justices inquired about. This abrupt change, without any corresponding amendments to the publicly released standards for granting waivers, only confirms the arbitrariness and opacity of the waiver process. At the same time, the continued high level of visa denials to Yemeni applicants and applicants from other countries calls into question the Trump administration’s defense of the Muslim Ban and highlights Justices Sotomayor and Breyer’s suspicion that the waiver process is little more than window dressing.

Meanwhile, an ongoing civil war in Yemen has spawned a massive humanitarian crisis. Three-quarters of the population now requires assistance amidst widespread famine, a cholera epidemic, and the internal displacement of over two million people.v Due to the war, the United States closed its embassy in Yemen in 2015 and began scheduling visa interviews at consular posts in other countries.vi Thousands of Yemeni visa applicants called for the mandatory interview began travelling to nearby Djibouti. Many of those applicants had already faced serious delays and been waiting for years for visas. As a result, they were still in Djibouti awaiting interviews or visa approvals when the Muslim Ban was implemented, and they remain stranded there today.

“When I was denied, I fainted on the spot at the embassy. Psychologically, it was devastating… I couldn’t think, I couldn’t eat or sleep, I became depressed. – Sharifa Geilan

This report documents the impact of the Muslim Ban on Yemeni nationals applying for immigrant visas to the United States, the denial of waivers under the Muslim Ban, and the resulting hardships inflicted upon Yemenis and Yemeni-Americans stranded in Djibouti and other countries. Our team traveled to Djibouti to obtain first-hand accounts from an otherwise difficult to access population. For many of the individuals interviewed, members of their families with different citizenship and immigration statuses remain scattered across multiple countries. Those in Djibouti—a country with a high cost of living—face mounting debts, limited medical and educational opportunities, and prolonged separation. The harrowing prospect of returning to the havoc in Yemen looms large and, absent a meaningful change in the Trump administration’s waiver-denial process, it may be the dangerous reality for many stranded families.

This report proceeds in five parts. First, it describes the existing U.S. immigration system including the changes wrought by the Muslim Ban and waiver process. Second, it explains the history of Yemeni migration to the United States and the long-standing hurdles faced by Yemenis in the U.S. immigration process. Third, it provides a brief overview of the war in Yemen. Fourth, it describes life under the Muslim Ban and the challenges of the waiver process. Finally, it documents the hardships faced by those stranded in Djibouti. Stories of those we spoke with are included throughout to emphasize the many nuances of the impacts of the Muslim Ban on Yemenis and their families in the United States.

Yemen is but one of the several of the Muslim-majority countries listed in the Muslim Ban. In choosing to focus on Yemeni-Americans’ experience with the Ban, this report aims to highlight the importance of a contextual understanding of the Ban’s origins and impacts. For Yemeni-Americans, the Ban follows years of extra scrutiny by U.S. immigration officials, which had already delayed applications, sometimes by more than a decade. In addition, Yemeni-Americans, like others included under the Ban, also face the direct consequences of U.S. interventions overseas. Finally, focusing on this community’s experience with one U.S. embassy allows a more detailed understanding of the Ban’s implementation, something that has been taken largely out of public view. When first implemented in January 2017, the Muslim Ban’s chaotic impact was visible for all to see as thousands rushed to airports in cities across the United States. Now, however, the center of activity has shifted to U.S. consulates overseas, rendering the process more inaccessible, invisible, and opaque. This report aims to shine a light on that ongoing chaos. The findings call into question any neutral, security-based interpretation of the Muslim Ban that has been central to the government’s defense of it.