Katherine Franke, New York, is the James L. Dohr Professor of Law at Columbia University, where she also directs the Center for Gender and Sexuality Law and is the faculty director of the Public Rights/Private Conscience Project. She also serves on the Executive Committee of Columbia’s Center for Palestine Studies, and Institute for Research on Women, Gender & Sexuality. She is among the nation's leading scholars writing on law, religion and rights, drawing from feminist, queer, and critical race theory; and teaches and lectures widely on human rights in Palestine/Israel.

Her most recent book, Repair: Slavery’s Unfinished Business, Haymarket, 2019, makes the historical case for racial reparations today by looking to forms of reparation for slavery in the form of land redistribution in the 1860s.  Her previous book, Wedlocked: The Perils of Marriage Equality, NYU Press, 2015, considers the costs of winning marriage rights for same sex couples today and for African-Americans at the end of the Civil War. Franke was awarded a Guggenheim Fellowship in 2011 to undertake research for Wedlocked. In addition to her work at the Law School, she works regularly in Palestine, most recently serving as an academic mentor for the human rights faculty at Al Quds University in East Jerusalem, and sits on the steering committee of the Academic Advisory Council of Jewish Voice for Peace. She also chairs the board of directors of the Center for Constitutional Rights, based in New York City.

Before coming to the Law School, Franke was an associate professor at Fordham Law School and the University of Arizona College of Law. From 1990 to 1991, she was the executive director of the National Lawyers Guild. Prior to that, she worked for the New York City Commission on Human Rights and founded the AIDS and Employment Project.

Detained and Then Deported: U.S. Human Rights Lawyers Barred from Entry into Israel 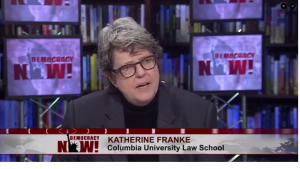